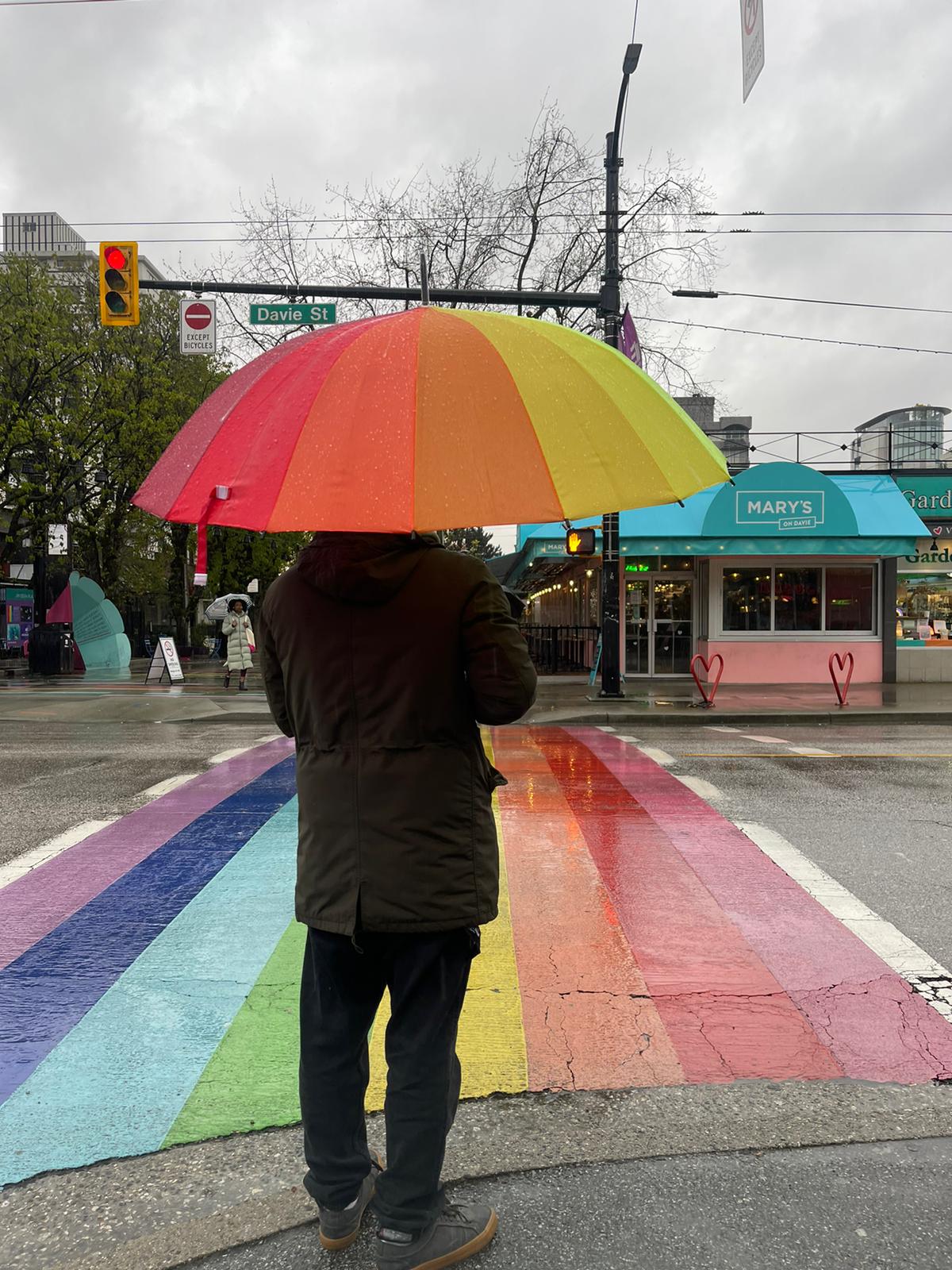 I can’t find the words to explain how deeply this photo moves me. Many of you are aware that my son Sid and I partnered with Rainbow Refugee to form a Circle of Hope to sponsor an LGBTQ+ refugee to Canada. It began with an email to Rainbow Refugee on December 30, 2019 and the forming of the One Love Circle of Hope in September 2020. My first contact with the person we sponsored was on September 20th that year and hundreds of text messages and emails, dozens of phone calls, and several sleepless nights later, a dream came true as we welcomed them to Canada 2 weeks ago.
That photo. “Hesam” was a refugee from Iran who had been living in Turkey for the past 6 years. For someone to have to leave a country to flee persecution on the basis of who they are or to risk imprisonment, public humiliation, beatings, torture, or even death, for who they love, to then find oneself on Davie Street in Vancouver literally surrounded by rainbows, imagine that! It brings me to tears just thinking about it.
I am so grateful to have been able to work with some incredible people who formed the dream Circle of Hope. Thank you to Lola, Todd, John, Brennan, Katelyn, Paul, and Sid. Thank you to Norma and Rainbow Refugee and their partner MOSAIC for the support and the important work they do. Thank you to the Shapiro Fund and so many other generous donors – we couldn’t have done this without you. Finally, thank you to Canada and all government agencies who have supported our efforts.
This has been one of the most fulfilling experiences and I would encourage anyone who is interested in learning more about how to form a Circle or sponsor an LGBTQ+ refugee to Canada to reach out to Rainbow Refugee.
- Jacqueline
Jacqueline Adler Personal Real Estate Corporation is an independently owned and operated broker member of Oakwyn Realty. This is not an offer for sale. Not intended to induce breach of an existing agency agreement.
2020 Jacqueline Adler Personal Real Estate Corporation, All Rights Reserved. Contents of this website, including the photography & videos, may not be used without written consent from Jacqueline Adler. PREC*
Maximum effort is put towards the details but cannot guarantee. Buyer to verify all details.